Case Study 1: From A to green a future vision of coachworks

The project engages sustainability and innovation in an effort to provide a significant step-up on the connection between Combigroep’s brand image and brand identity through a product. The team intended to make a creative exercise by projecting a future vision that finally inspired a realistic and influential product – an environmentally friendly and versatile coachwork.

The context of the project was defined after an internal and external analysis – using quantitative research tools – and the use of several qualitative tools (stakeholders, competitor, and DEPEST analysis, non structured interviews, role playing, user analysis and personas, and creative sessions) derived from the chosen framework and approach (Vision in Product Design (ViP)). The next phase of development was included a future vision for the future delimited by different factors.

The ViP methodology was used with the years 2008 (current situation) and 2025 (future scenario) as a frame of work to develop the vision, and having the year 2010 as a focus for the exploration of the design opportunities that can lead the group towards this future vision. The geographical context was bounded between local (municipal) and national (respective country) road infrastructure. Municipalities and countries play the most important role on the perspective of expanding markets. Attention was focused on coachworks for distribution and delivery. A limit was set between 3.5 to 7 tons for local delivery and between 7 to 22 tons for distribution.

The ViP methodology provided deep insights within the current product and allows, like this, a better performance on the involvement with the subject. This exercise is divided in two phases a deep approach to the product and the following interpretation of the future. The deconstruction phase involves an analysis of the product regarding its functions and values on the present context, an interaction overview that defines the most important qualitative values and a context definition on which an imaginary country was created (called Barist) to synthesize a series of world conditions and influential factors. On the next phase the interpretation and prediction exercise was done where it was possible to illustrate on a collage a consequent future for the same country.

With this the opportunity is created to simulate possible scenarios and users using mind mapping and role playing techniques from which the result is a mission statement. 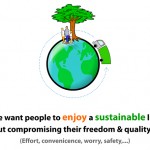 So as to precede action the team made a review of interaction values (this time that must achieve the defined task) and came up with six qualities that will determine the design direction on the conceptualization phase.

The conclusion of ViP, is an overview of the previously referred aspects and their compilation on a cartoon that illustrates and tells the story of Combi’s future within the intermodal transportation system.

For the idea generation some inspirational context features were used such as the digitalization of services and material use trends, online ordering, energy saving policies, traffic optimization and governmental initiatives.

The idea generation was realized after having established the main points of attention and also the general/independent features. During one week sketches of general systems and details were projected and shared. After this the group made the identification of the existing, more relevant typologies and clustered some of the preferred ideas. The categories were then summarized according to their own values, aims and technical characteristics. In parallel a list of general features was also discussed.

Following this step the group was divided amongst the typologies in order to follow the development of these into concrete concepts. The conceptualization phase resulted in three strongly developed concepts from which the client is invited to appreciate the scope of opportunities for a near future. Each concept turned out to be distinguished by the different level of innovation.

The Micro Delivery System (MDS) is a new kind of business for Combigroep Carrosserieë in order to extend its potential market following the regulations and trends about transportation and logistics in the European Union. 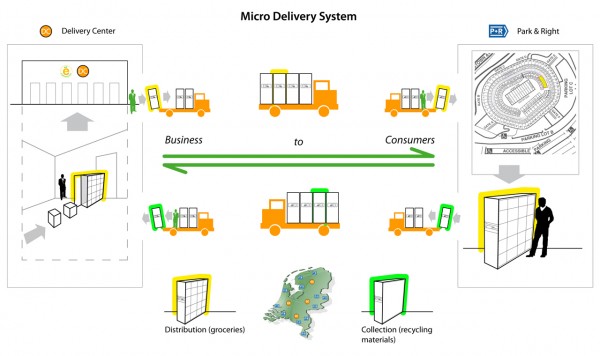 The key element of this new business consists of a system of detachable Micro Delivery Modules which are to be loaded in the Delivery Centers (business) and to be used in the different contexts (users, which could be business or consumer). In that sense the new business could be business to consumers (B2C) or business to business (B2B). It is a new perspective for Combigroep Carrosserieë to work with (and in) different businesses like night delivery services, e-shopping or integrated deliveries.

The key element of this new business for Combigroep Carrosserieë consists of a system of detachable Micro Delivery Modules (g-modules) that are to be loaded atop of special trucks (g-combies) at Delivery Centers (e-groceries + DC) and to be used in the Park and Rides (users). Each module has space for approximately 50 g-boxes (35cm x 35cm x 50cm) to deliver goods in Park and Rides (P+R).

Great site you have here but I was curious about if you knew of
any discussion boards that cover the same topics discussed
here? I’d really like to be a part of online community where I can get opinions from other experienced individuals that share the same interest. If you have any recommendations, please let me know. Thank you!